UFC Vegas 31 is down a fight, as Saturday’s card has lost a bantamweight scrap between LFA vet Miles Johns and Brazil’s Anderson dos Santos.

“It’s with great regret that I have to inform you all that I will not be fighting this evening. My opponent/camp tested positive for COVID so the fight is off,” Johns wrote, just hours out from the event’s start time. “I want to wish him a speedy recovery, want to thank the UFC for the opportunity but mainly want apologize to everyone who was looking forward to watching me fight today.”

UFC officials confirmed the bout’s cancellation, citing COVID-19 protocols. No indication was given as to whether the promotion would attempt to re-book the fight for a later date.

Winner of a UFC contract on Dana White’s Contender Series in 2019, Johns had posted a 2-1 record to date, and was coming off a victory over Hawaii’s Kevin Natividad. Anderson dos Santos (21-8), after dropping his first two bouts in the promotion, had staved off elimination by getting his hand raised against Martin Day last November.

Saturday’s UFC Vegas 31 (UFC on ESPN 26) is headlined by a lightweight showdown between Islam Makhachev and Thiago Moises. 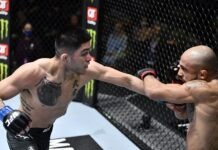