Uncasville, CT — Lightweight Charlie Campbell feels he did enough at Bellator 262 to earn a long-term contract with the promotion.

“If there’s anybody in the world that doesn’t think I did, they obviously don’t know a damn thing about this sport,” Campbell exclaimed following the event, speaking to media outlets including Cageside Press.

The win came via a devastating TKO as opponent Nick Giulietti was peppered with body shots and multiple unanswered strikes. But earlier on, Campbell found himself on the mat.

“That split second he got that takedown was like ‘sh*t, I just spent the whole week visualizing being on my feet the whole time.’ Then I wind up lying on my back. But I have the best team, best coaches in the world,” Campbell told Cageside Press backstage at the Mohegan Sun Arena. “So I was listening to them, we spent the whole weekend preparing mentally, I had a great warm-up, no one’s better than me at executing when they ring that bell.”

Campbell, hailing from Long Island, trains with Serra-Longo MMA, and improved to 4-1 with the win. His team is a big part of that. “You’re only as good as the best guy you train with. I made the decision a few years ago in my life to join that team, and they welcomed me. I knew that I would get what I put in with it. I showed up every day, and it paid off. I committed to training, they committed to me.”

While Campbell is now hoping for a long-term deal and perhaps a shot at the top ten in the lightweight division, he’d also love a shot against celebrity boxer Jake Paul.

“His posse is fake, everyone’s sick and tired of him, he does a good job selling stuff. If him and anyone he called out were playing tennis, no one would watch,” Campbell exclaimed post-fight. “Combat sports is the most realest one-on-one thing in the world.”

As for Paul, “he’s full of sh*t, if I ever got a chance to see him in person, I’d fight him for free. But if he wants to set something up— in the future I guarantee you’ll get him calling me out. He thinks he’s the man with the media right now, watch. I’ll take his girls away from him. Meet me in the Bellator cage Jake Paul, your girls are mine.” 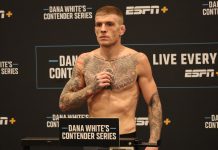