Las Vegas, NV — Thiago Moises was in high spirits at the UFC Vegas 31 media day on Wednesday. Clearly elated to be in his first main event with the promotion.

Moises, who faces off with dangerous Dagestani Islam Makhachev this weekend, was even thrilled to be on his first UFC poster. “That’s very cool, man. That’s what I’ve dreamed my whole life. I’m living a dream, I’m very happy.”

While he entered the promotion in 2018 off Dana White’s Contender Series, the Brazilian stumbled out of the gate. It has been in his last three fights, three consecutive wins, where Moises has found his stride.

“Everything is falling in place. My mind set, my skills, I’m getting more mature,” Moises replied when asked about the key to his recent success. “I think I was very young when I came to the UFC. I’m still very young, I have to lot [of room] to grow, and I can’t wait to see what I’m going to be like in three or four years.”

Turning his focus to Islam Makhachev, Moises stated that “I think he’s a great opponent, a great challenge.”

“He’s a great fighter. He’s well-rounded. He’s a good striker, his strength of course is the takedowns, but he has good grappling as well. I think that’s why nobody what’s to fight him, but I’m a well-rounded fighter as well,” said Moises, who trusts not just in himself, but in his team as well.

With a win, Moises sees a top five opponent next, and believes he’d be right in the mix for a title shot. But the Khabib Nurmagomedov-coached Makhachev will be no easy out.

Asked to compare to the two, Moises opined that “I think Khabib has a higher pace than him. Khabib doesn’t stop, more pressure. I think Islam’s a little bit more technical on the feet, but for me, Khabib is the best lightweight of all time. Nobody’s like Khabib, and Islam is definitely not like Khabib. That’s the biggest difference between them. I think the pace, Khabib has a higher pace than him.” 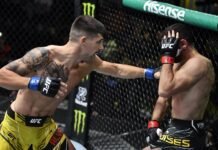