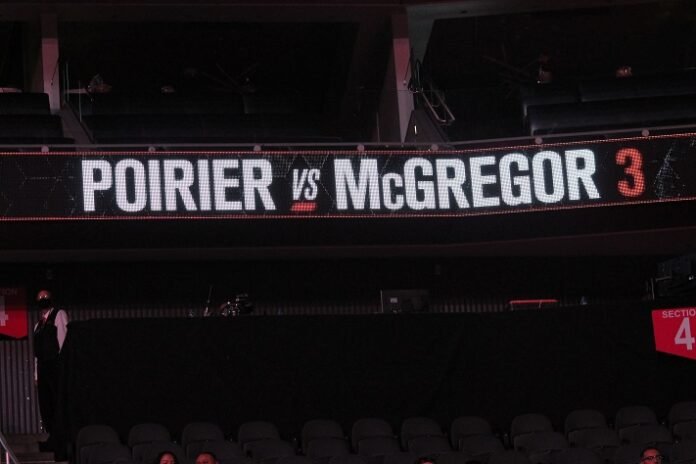 Conor McGregor suffered the toughest loss of his career at UFC 264 in Las Vegas to Dustin Poirier. After multiple submission attempts, McGregor simply lost control of the fight. Following an ill-advised guillotine attempt by the former double-champ, Poirier landed several punches and elbows to McGregor’s head. Although McGregor got up, he fell back down after his ankle gave out. McGregor left UFC 264 on a stretcher.

UFC president Dana White (by way of Hunter Campbell) confirmed that McGregor broke his lower tibia and was expected to have surgery Sunday morning. Keep in mind that McGregor turns 33-years-old this week. By the time McGregor has surgery, fully recovers and returns to the octagon, it is very likely that McGregor will be 34-years-old or very close to turning 34.

For the first time in McGregor’s career, he has suffered consecutive losses. More importantly, McGregor is 3-4 in his last seven UFC fights. Although many of the MMA media and fans, and even McGregor himself, pondered the idea of a trilogy with Nate Diaz, McGregor will be sidelined for quite some time. Although McGregor said the rivalry with Poirier is not over, the reality is is that Poirier and likely Diaz will move forward rather than wait for McGregor to return.

There is a lot of uncertainty regarding McGregor’s future. His performances have not been good lately. Add a gruesome ankle injury on top of that, and McGregor has an uphill battle if he wants to reign supreme in the lightweight division. That will require a full recovery, in addition to stringing together a few wins.

Since returning to the UFC after his boxing match with Floyd Mayweather, McGregor has gone 1-3 since 2018. McGregor’s two biggest weaknesses are his ground game and his stamina. Those two factors have been used against McGregor, hence his recent struggles.

But given the extent of McGregor’s ankle injury, which has drawn comparisons and references to the leg injuries sustained by Anderson Silva and Chris Weidman, whether McGregor can come back stronger at 33-years-old is another key talking point.

McGregor rakes in a wide audience every time he fights. But will that same McGregor show up after recovering from surgery?

Only time will tell. However, the odds are heavily stacked against McGregor. Until then, Poirier will pursue a lightweight title match with Charles Oliveira, while Daiz will need to look for a new opponent.

For the first time in a good long while, the MMA world is poised to move on without Conor McGregor.