Now a Bellator fighter, Daniels and Thompson have a shared history from their kickboxing days, with Daniels earning a TKO win over Wonderboy in 2007. Both are karate-based fighters, and Thompson wasn’t surprised that Daniels was once again helping an opponent prepare for him.

“Great fighter, man, great fighter. I feel like I deserve some of whatever these guys are paying him. Because, what was it? Rory MacDonald brought him in, Tyron Woodley brought him in, now Gilbert Burns,” Thompson told Cageside Press during this week’s UFC 264 media day. “Come on man, I’m helping you out! I should get a percentage of what they’re paying you.”

In all seriousness, Thompson pointed out that Raymond Daniels is “one of the best to do karate.” But, he noted, “we have different styles. Completely different styles. Which, I don’t mind him going up there. Sure, go up there and help him out. It’s not going to help you come Saturday. It also gives me some confidence knowing that there’s only one guy in the entire world for people to bring in for me. One guy? That tells you how difficult it is for my style, to prepare for. And can he do it in eight weeks? Can he make those changes? We’ll see.”

Thompson has good reason to be excited for Saturday’s match-up with “Durinho.” Now on a two-fight win streak, a victory against a fellow title challenger should do wonders for his hopes of another welterweight title shot. “This is the first time in a while that I’ve faced somebody ranked higher than me. I think this is awesome. Hat’s off to Gilbert Burns, because nobody else wanted to take it,” said Thompson. “Gilbert Burns, after that loss with [welterweight champ Kamaru] Usman, he’s like ‘you know what, I’m going to give Stephen his shot.’ So I think this is awesome. It’s big for me, because you never know, the next shot could be the title shot.”

Watch the full UFC 264 media day scrum with Stephen Thompson above. The event takes place this Saturday, July 10 at the T-Mobile Arena in Las Vegas, Nevada. 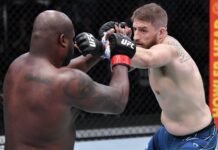 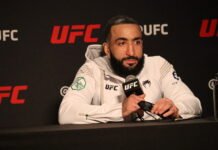