After struggling to find a willing opponent month after month, jiu-jitsu wizard and Ultimate Fighter winner Ryan Hall finally returned to action at UFC 264. His opponent, the undefeated Ilia Topuria, a Georgian fighter undaunted by Hall’s ground game — and unimpressed with most of his fights inside the octagon.

Boasting that he had plenty of black belts to train with while coming up in the sport, Topuria did admit ahead of the fight that he’d prefer to keep things standing if possible.

Topuria opened the fight at center, light on his feet, with Hall circling on the outside. Hall threw out a kick that fell well short, with Topuria unwilling to take the bait and move into takedown range. Hall then landed a spinning kick that was partially blocked; moments later, Hall was on his back on the ground, trying to lure Topuria in to no avail. A diving takedown attempt followed.

The rolling attacks continued, with Topuria at one point dragging Hall across the octagon floor while the grappler held on to an arm. In another grappling exchange, Hall nearly tied up a leg. But moments later, Topuria tagged Hall. This time, when Hall went to the ground, he was hurt. Hall’s style at times looked awkward, telegraphed, and almost in slow motion, but Topuria was well aware of the danger going to the ground posed. So when he finally went there, he had to be sure. That moment came when Hall dropped down after a kick.

Topuria unloaded with hammer fists, got in control, and landed several punches to the face that were not protected. Moments later, the ref made the save, with Hall completely dazed on the ground. 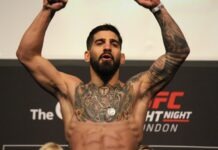