Earlier today, prior to sitting down for a belated review of the latest TUF 29 instalment entitled Let the Games Begin, I had the chance to speak to former UFC and current Bellator heavyweight Matt Mitrione. “Meathead” got his start in fighting via The Ultimate Fighter, back in season ten.

It was not a joyous experience. If he’d had his way, Mitrione would have taken just about any other avenue into the UFC. It was not personality conflicts that did him in — he admitted to always having something of an abrasive personality — but being cooped up away from family.

Of course, for every Mitrione there’s someone like Shana Dobson, who once told me about the bond she had with her fellow cast mates from the women’s flyweight season. Still, it’s crucial to remember what these athletes are sacrificing for a shot at their dream — and, at the same time, to entertain the rest of us.

Which brings us to this week’s episode of The Ultimate Fighter.

“We’re going to turn it around. Let’s turn this whole thing around, let’s go!” Alexander Volkanovski exclaimed at the onset of the episode, clearly buoyed from his team getting their first win a week ago.

Team Orteaga, meanwhile, responded with a prank. Two actually. Jacking up Team Volkanovski’s cars and taking off the wheels, and bringing in a couple of donkeys adorned in Team Volkanovski garb. Volk took that one all in stride.

“Volk talked sh*t, I didn’t talk sh*t to him. So I’m like okay, bro. Let the games begin,” Brian Ortega said in explaining the pranks. That led to Ortega admitting that at points, he has respected Volkanovski, while at others, he’s sh*t on him.

This week, it’s Ricky Turcios on deck first. The Contender Series alum is getting a second chance on The Ultimate Fighter. “Come back stronger for the next one. That’s mixed martial arts. Now, I’m a stronger fighter. I’ve learned from my losses, I’ve learned from my wins,” Turcios explained. “Lord willing, I’m going to get these big victories here inside the UFC Apex during this tournament.”

Team Ortega’s Dan Argueta is the man who will stand on the other side of the cage from Turcios. Ortega wants a smart fight from his student. “I don’t want his mind set messing him up.”

“I hate fighting. It’s terrifying. But I’m good at it,” admits Argueta. No wonder Ortega is concerned about the mindset his pupil carries with him. Still, Argueta admits that the terrifying part is getting to the fight.

Come fight time, one heck of an entertaining scrap unfolded. After some feeling out, Argueta began opening up, both with his hands and kicks. A round that focused on stand-up followed, both men getting their shots in. By the end of the first, Argueta was looking for a submission, but a gritty Turcios survived the round.

The second saw the action tick up a notch. Argueta again came close on the submission front, but it wasn’t enough. Turcios did well on the ground, and managed to win the round. That necessitated a third.

Argueta wound up fighting off a takedown early, reversed it, but it was Turcios transitioning to top. Argueta tried for a choke from the bottom but didn’t have it. That allowed Turcios to set up shop in half-guard, earning a whole lot of control time with the fight on the line. Argueta spent far too much of the second half of the frame with Ricky Turcious on his back. Turcios never did find the finish, even with hooks in; instead, Argueta exploded out late, pulled guard for a guillotine, missed it, and finished the round eating punches. That still resulted in Turcios winning the bout on the scorecards, and moving forward in the bantamweight tournament.

“This is a dream and a vision that I had, and I made that vision a reality with my fists and my mind and my spirit,” Turcios proclaimed following the victory. Team Volkanovski, meanwhile, now has two wins in a row, and are back in it. 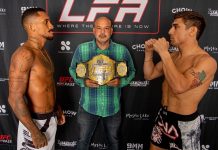 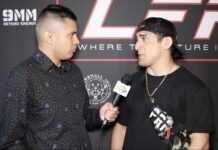 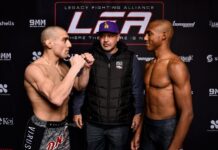