Sijara Eubanks has a new opponent for her July 24 fight.

Eubanks (6-6) will be looking to snap the second two-fight losing streak of her career while also putting her No. 13 ranking in the bantamweight division on the line. “SarJ” fought four times in 2020, going 2-2. She defeated Sarah Moras and Julia Avila to start her year but then would lose to Ketlen Vieira at UFC 253 on ‘Fight Island,’ two weeks after fighting Avila. Eubanks would end her 2020 campaign by dropping a unanimous decision to Pannie Kianzad. With two straight losses and a .500 record, Eubanks needs a win.

Reed (4-0) is the current CFFC strawweight title holder and has defended the belt twice since winning it at CFFC 83, where she upset Jasmine Jasudavicius. Reed is coming off a second-round finish of Dana White Contender Series alumni Hilarie Rose last month at CFFC 97: Reed vs. Rose. She will be going up two weight classes when she faces Eubanks next month.

UFC Fight Night: Sandhagen vs. Dillashaw will take place on July 24 at the UFC Apex in Las Vegas and will be broadcast on ESPN.

For now, the Fight Night card looks like this: 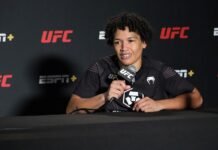