Bethe Correia finally gets her retirement fight in October.

Combate was first to report the news that Correia will fight No. 14 ranked bantamweight Karol Rosa on October 2 at a yet-to-be-announced UFC event. The fight will be the former title challenger’s last fight in the promotion. Correia was supposed to fight Wu Yanan in December and then in January; however, visa issues and appendix surgery put that fight on ice.

Correia (11-5-1) only fought once in 2020, and that was against top 15 fighter Pannie Kianzad on ‘Fight Island’ at UFC on ESPN: Whittaker vs. Till. Unfortunately, she would lose a unanimous decision. “Pitbull” has only won two fights since her title fight with Ronda Rousey in 2015, but she will try and retire on a win, something most fighters don’t do.

The October 2 UFC event is expected to be headlined by Johnny Walker and Thiago Santos, but nothing is official as of yet. 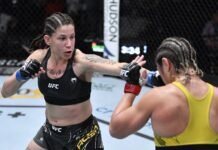 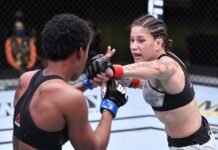