Fares Ziam would come out on top via majority decision after a rough 15 minutes against Luigi Vendramini.

Marvin Vettori wasn’t the only fighter representing Italy on the UFC 263 card. Lightweight Luigi Vendramini was also in action on Saturday, looking to pick up his second consecutive win in the promotion. Opposite “The Italian Stallion” was Fares Ziam, looking to make it two in a row in the octagon as well.

France’s Ziam started the fight by immediately plodding forward. Vendramini responded by looking for a takedown that was quickly stuffed. Ziam began working the jab nicely as well, throwing many different feints. Vendramini tried to throw two wild hooks but Ziam easily evaded them, and landed a nice inside leg kick. Ziam backed Vendramini up to the fence with his many feints and landed a sneaky left hook clean. Vendramini tried to get Ziam’s respect with a hard right hand, but Ziam ate it well and went right back to trading at distance. Ziam and Vendramini sent us to the second round by alternating head kick attempts, neither of which landed.

Vendramini opened the second the way he opened the first, with a takedown attempt that was stuffed. Vendramini didn’t lose confidence though and actually found some success closing the distance against Ziam. Ziam did land some nice jabs and short hooks however, once again Vendramini shot for a takedown but couldn’t get it again. The action was a lot slower in the second round compared to the first, leading to boos from the Arizona crowd.

Vendramini finally decided to go for broke in the final round, landing a huge right hand that hurt Ziam. Vendramini hunted Ziam across the octagon and landed another big shot that sent Ziam down. If only this version of “The Italian Stallion” had appeared earlier. Vendramini landed some big ground and pound before finally moving into mount and raining down blows. Ziam would fight out from the bottom, and make his way back to his feet. Vendramini would blitz Ziam again near the end of the round but it didn’t do as much damage this time around. While Vendramini did his best to ensure otherwise, but the two would end up going to the judge’s scorecards. There, after a moment of drama when Bruce Buffer stumbled in announcing the results, Ziam took home a majority decision. 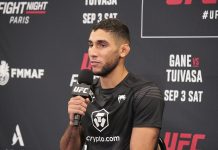 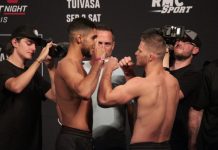 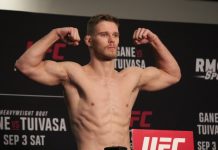