Heavyweight sluggers delivered at UFC Vegas 27 with Jared Vanderaa notching his first win with the promotion in a brawl with Justin Tafa.

Justin Tafa and Jared Vanderaa were both looking to get back in the win column at UFC Vegas 27.

The heavyweight pair were both coming off single losses: Tafa against Carlos Felipe, Vanderaa against Sergey Spivak. Prior to that, Tafa had earned his first UFC win against Juan Adams, while Vanderaa had earned his way into the promotion on the Contender Series.

Vanderaa began the fight with a stiff leg kick then pumped a few distance-finding jabs. Vanderaa went back to the leg kick then Tafa threw a heavy right hand to get Vanderaa’s attention. The two heavyweights had different objectives, with Vanderaa biding his time and peppering Tafa with leg kicks and jabs, while Tafa was looking for the heavy shots. Although Vanderaa was able to catch Tafa with a big knee to the head. Vanderaa pumped his jab and caught his opponent clean while also looking to counter strike when Tafa came in.

Vanderaa landed a head kick in the early going of the second round and Tafa began to use some kicks of his own. A strong left hand landed for Tafa, but then a big right hand cracked Tafa. He began unloading on his opponent, who was stuck against the fence, but Tafa fired right back and caught Vanderaa with a pair of big punches that cut him open and forced him to close the distance. Tafa began having more success toward the end of the round, landing a big shot that stumbled Vanderaa with a few seconds left.

Tafa started the final round by landing four consecutive straight punches. Vanderaa answered with a few kicks to the body, but Tafa had certainly found a rhythm after struggling in the early going. Vanderaa improved as thee round went on, catching Tafa with body kicks and a pair of hooks. He followed that up with a four-punch combination that Tafa happily ate. Tafa answered with a lunging hook that caught Vanderaa. He then initiated a clinch then took a shot below the belt with a little over 30 seconds left in the fight. After the fight resume, both men threw down to the end to cap off a fun heavyweight fight. 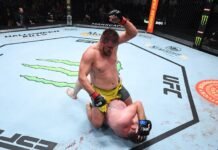 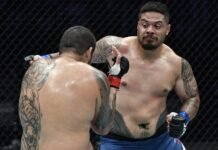