Following Thursday’s UFC 263 press conference, the card’s biggest stars faced off for the first time. And despite there being a grudge match in the main event between middleweight champ Israel Adesanya and challenger Marvin Vettori, it was the co-main event pairing that got heated.

That would be flyweight champ Deiveson Figueiredo and challenger Brandon Moreno, like the main event appearing in a rematch this weekend. In this case, it’s an immediate rematch, after the duo fought to a draw at UFC 256 back in December. While neither man seemed particularly irate after that result, the “God of War” Figueiredo gave Moreno a solid shove when they faced off on stage Thursday — a sign, perhaps, that the champ was taking the Mexican challenger even more seriously this time out.

Notably, it was a rehash of Jeremy Stephens’ shove on Drakkar Klose, which actually injured Klose. Dana White, who had been critical of matchmaker Sean Shelby for not preventing that incident, was caught unaware by Figueiredo’s sudden heel turn.

No such calamity transpired this time out, thankfully. Instead, it was Nate Diaz stealing the show, lighting up a joint on stage at Thursday’s press conference. Luckily for Diaz, a noted enthusiast of marijuana who has his own CBD company (Game Up Nutrition), the Arizona State Boxing and Mixed Martial Arts commission is bringing its drug testing program in line with the UFC’s Anti-Doping Policy, run by USADA.

That means that marijuana will not be considered a banned substance in or out of competition, unless there is evidence that an athlete is impaired during a fight.

Great working with AZ Commission, who are adopting our testing program/rules for this weekend. Only issue with marijuana (THC) for Saturday’s fights is don’t show up impaired or under the influence. How it should be!

Headliners Israel Adesanya and Marvin Vettori exchanged a few words when they faced off. This time, Dana White made sure to keep the fighters separated.

Check out a gallery of highlights from Thursday’s press conference face-offs below! 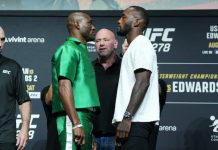 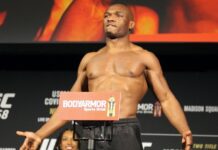 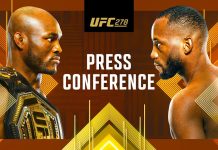