Bellator’s welterweight championship was back in play Friday night at Bellator 260. And so were fans.

The first event attended by the fans of the promotion since prior to the shutdown last year, a result of the coronavirus pandemic, was a big one. In the main event, Douglas Lima returned to 170lbs after a failed big for a second title at middleweight. He was putting his belt on the line against undefeated 25-0 challenger Yaroslav Amosov, in arguably one of the toughest tests of Lima’s career.

Also on the card, fan-favorite striker Paul “Semtex” Daley was back at 175lbs. The catchweight king (at least of late) was taking on top welterweight Jason Jackson in the evening’s co-main event.

Familiar names like Aaron Pico, Nick Newell, and Amanda Bell also peppered the card. Full results for the event, which takes place at the Mohegan Sun Arena in Uncasville, CT on Friday, June 11 can be found below. Live streams of the preliminary and main card (where available) can be found above. 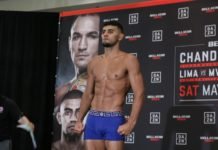