A promising women’s flyweight scrap has been removed from the Bellator 260 card.

As weigh-ins unfolded this morning for tomorrow’s event, Bellator PR confirmed that former Invicta FC 125lb champion Vanessa Porto had been removed from her fight with Ilara Joanne, in effect cancelling the bout. The Mohegan Sun Commission did not clear Porto to compete, though no specific reason was specified.

BREAKING: The flyweight bout between Vanessa Porto and Ilara Joanne has been cancelled. Vanessa Porto was not cleared by the commission to compete. #BELLATOR260

Porto (22-9), however, was reportedly the final fighter to weigh in Thursday during the early weigh-in, according to MMA Junkie. Her bout with Joanne had been switched at the last minute to a catchweight of 128lbs — and the Brazilian still required a towel to make the contracted weight.

That appears to have been the catalyst in the bout being scratched.

Porto first competed for Bellator in a losing effort against Liz Carmouche back in April. Prior to that defeat, she had won four straight, capturing the vacant Invicta FC flyweight title against Pearl Gonzalez in February 2019. A planned defense of that belt was nixed when opponent Karina Rodriguez missed weight for Invicta FC 38.

Joanne (9-5) had a three-fight win streak snapped when she fell to Kana Watanabe at Bellator 237 in 2019. She has not competed since.

Bellator 260, taking place Friday night at the Mohegan Sun Arena in Uncasville, CT, is headlined by a welterweight title fight between champ Douglas Lima and the undefeated Yaroslav Amosov. 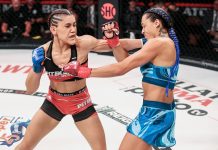