Cody Haddon is a young 22-year-old bantamweight prospect fighting out of Perth, Western Australia. This Saturday at Eternal MMA 60 he is putting his undefeated 2-0 record on the line against Steve Ecreg (6-1). That fight will happen in the co-main event of Eternal MMA 60 airing exclusively on UFC Fight Pass.

First of all, how did you get into MMA?
I have always liked martial arts from a young age. My dad used to watch a lot of combat sports. I started doing taekwondo when I was six and when I realized I was good at it I wanted to keep going. I set my sights high, and have worked every day since then to achieve this. Even though it’s been 16 years, there is so much more left for me to show the world.

At what point did you realize this sport was something you were going to pursue?
After competing in taekwondo I decided I wanted to expand my skillset and learn the ground game aspect of fighting with an end goal of piecing it all together to transition to MMA in the future. I was about 10 when I started Jiu-Jitsu and I was a quick learner and that’s when I realized that this was something I was going to be good at and I was going to stick to.

Is MMA your full-time job??
Yes MMA is my full-time job, but I have also been teaching and coaching since I was 15.

When you went pro what made you decide to make that jump from the amateurs?
I couldn’t get any more fights as an amateur. I had to go pro to get matched up, and I’ve always wanted to fight the best guys so it wasn’t a hard decision.

What has been the highest and the lowest point in your career so far?
The highest point in my career was winning my first national medal in boxing in 2012 in Tasmania. It was the first nationals I had competed in and I was coming in with a lot less experience than my opponents. I can’t put into words how much this meant to a 13-year-old me at the time.

The lowest point in my career was when I lost in the 2017 IBJJF World Nogi Championships in the quarter-finals.

Do you have a background in other sports? List your accomplishments in all sports.
Boxing – 3-time Australian champion
BJJ – 4-time Pan Pacific champion

It looks like Steve Erceg may be your biggest test to date. What do you think about him as an opponent and how do envision this fight playing out?
Yes, he is my biggest test to date. I think Steve is good everywhere and doesn’t necessarily have any holes in his game. However, I feel like in the stand-up exchanges that I’m going to have the upper hand. It’s definitely going to be a technical battle and might be my first fight that actually goes the distance. I see myself winning this fight via unanimous decision.

You’re still young in your career so where do you see yourself in three years?
In three years time I would have cleaned out every champ in the bantamweight division in all the Australian promotions. After that, I’ll be taking bigger fights on the international stage. 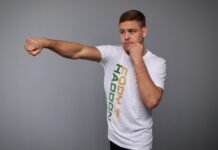 Meet Cody Haddon: The 22-Year-Old Australian Finisher That No One Wants To Fight