A short notice strawweight bout between ranked contenders Michelle Waterson and Marina Rodriguez will now headline UFC Vegas 26 on May 8.

A short notice bout between ranked strawweights Michelle Waterson and Marina Rodriguez is official as the new headliner for the UFC Vegas 26 on May 8. The news comes after the previously announced main event between former champion TJ Dillashaw and Cory Sandhagen was postponed due to an injury to Dillashaw.

Michelle Waterson is looking to build on her gritty performance against Angela Hill in which she prevailed in the five round affair last September. A veteran of the UFC since 2015, Waterson’s Octagon career has seen her face some of the biggest names the division has to offer in Rose Namajunas, Joanna Jędrzejczyk, Carla Esparza, and Paige VanZant. Waterson is also a former Invicta atomweight champion, winning the title in 2013.

After operating relatively under the radar since in her MMA career, Marina Rodriguez had her breakthrough this past January in which she stopped surging prospect Amanda Ribas by second round TKO. The fight built on her previous 12 career victories that also saw her defeat Jessica Aguilar and Tecia Torres in the UFC. Her only career loss was to Carla Esparza by decision last July.

The event is set to take place at the UFC Apex in Las Vegas. The new fight card is now set with: 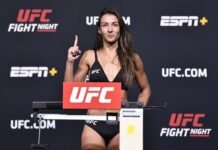