It didn’t take long for John Lineker to claim his latest victim in ONE Championship.

At ONE on TNT III on Wednesday — or at least on the event’s tape delayed broadcast — the former UFC contender absolutely flattened Try Worthen, with time winding down in the fight’s opening round.

Lineker vs. Worthen served as the main event of the TNT card, the promotion’s third airing in U.S. prime time. Worthen, a.k.a. “Pretty Boy,” was a fill-in for Lineker’s original opponent, Stephen Loman. Loman, a Brave CF star who would have been making his ONE debut, was pulled from the bout after testing positive for COVID-19.

That left Worthen with the unenviable task of going toe-to-toe with the Brazilian known as “Hands of Stone.” And true to his name, Lineker hit like a rock. Early in the fight, the brick-fisted fighter ripped the body, tenderizing Worthen until a punch strayed low, bringing a brielf halt to the action. That still looked less painful than the finish, which saw Worthen dropped with a single right hand, just outside the circle. The knockout blow came moments later, with a single follow-up shot turning the lights out. That in turn led to the ref quickly calling Lineker off.

For Lineker, it’s three straight wins, and two straight finishes, under the ONE banner. Which makes it feel a lot like a date with bantamweight champ Bibiano Fernandes is inevitable. 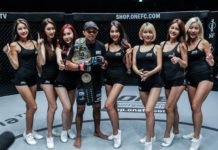 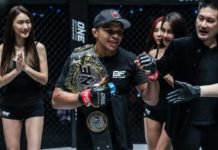 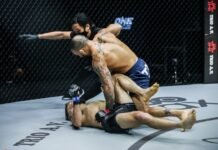