Paul Daley finally gets a chance to throw down with Sabah Homasi this weekend. And ahead of the fight, he’s seen a shift in tone from his Bellator 257 opponent.

Homasi stated Wednesday that he’s not intimidated by Daley’s long, storied career. “I think he has to say that, for his confidence,” replied Daley (42-17-2), speaking at the Bellator 257 virtual media day this week. “I know already that he’s nervous, he’s already doubting himself, and it’s a big change from the interview he gave when we were supposed to fight pre-COVID. When he was saying that he was a fan of me, and that he’d been watching me fight for a while.”

Daley continued by saying “that in itself tells me that he’s nervous about the fight, and it’s just for his confidence that he’s saying stuff like that. Just to reassure him that he deserves to be in there with me.”

As to the future, Daley left things open-ended, despite previously suggesting that his next fight would be his last. “Who knows. I’m just here to fight Friday night, put on a fantastic performance, stop the guy, get him out of there, leave no questions as to my ability, and just put on a great show.”

So why is he still going, 59 fights in at age 38? “I love to fight. And above that, very few people who meet me have the same idea of me prior to meeting me. Everyone thinks I’m this f*cking psychotic fighting machine. But deep down, I’m a martial artist. What brought me to martial arts was ninjas,” he explained.

It wasn’t street fighting or anything of the sort, continued Daley. “I just wanted to be a ninja, I just wanted to disappear, I wanted to do the meditation thing, intertwine my fingers and summon a dragon or some sh*t like that. So deep down, I’m a martial artist, and that’s what keeps me going.”

Admitting it’s a cheesy quote, “it’s the endless search for perfection that drives me. I want to be the best martial artist I can be.” 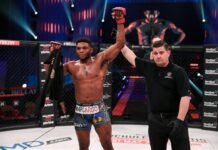