All-female fighting promotion Invicta FC has sold, and will have a new broadcast home moving forward.

ESPN’s Ariel Helwani was first to report news of the sale, which will see Anthem Sports & Entertainment acquire the promotion. Moving forward, the promotion, which parted ways with UFC Fight Pass earlier this year, will air events on AXS TV in the U.S. and Fight Network in Canada, both of which are also owned by Anthem. Outside of the North America, Invicta events will be found on digital service AXS TV NOW.

Invicta FC officials confirmed the sale to Cageside Press following the ESPN report. In a press release, Ed Nordholm, the Chief Corporate Officer of Anthem Sports & Entertainment and the President of its Sports Media Group, confirmed that Invicta President Shannon Knapp would stay on with the company. “We are very excited to acquire this uniquely positioned MMA promotion, adding a new content pillar to our combat sports portfolio as part of our overall strategy to transform Anthem into a leading global content company. What Shannon has accomplished with Invicta is one of the sport’s great success stories. She will play a vital role as a senior member on the Anthem executive team and as a shareholder in Anthem, and we look forward to helping her take Invicta to new heights.”

That same press release quoted Knapp, who added “This is a huge moment for Invicta and for women in the sport. Invicta FC was founded to give female mixed martial artists a platform where they could compete and prove the doubters wrong. Now, as part of the Anthem portfolio and with shows on national television for the first time, Invicta’s platform will be bigger than ever, and more people will have the opportunity to see the world’s elite female athletes compete. With Anthem’s backing, it’s going to be easier than ever for our fans to catch all the Invicta action and for new fans to find out exactly why Invicta is one of the world’s most exciting fight promotions.”

Invicta has yet to host an event in 2021, but that will change, with Invicta FC 44 set to take place on Friday, May 21. Atop that card, atomweight champ Alesha Zappitella will put her title on the line against challenger Jessica Delboni.

Invicta FC was founded in 2012, and quickly became known as a top feeder league for fighters making their way into the UFC, Bellator and other promotions. In 2014, UFC Fight Pass became the exclusive home of its events. Over the years, the promotion has seen talents like Cris Cyborg, Sarah Kaufman, Amanda Nunes, Michelle Waterson, Carla Esparza, Rose Namajunas, Kay Hansen, Miranda Maverick, and others compete under its banner. 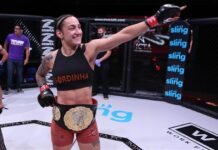 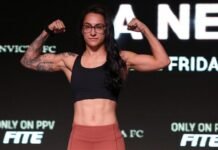