“A-1” Jornel Lugo took a while to be signed by Bellator. But now under a multi-fight deal, and ranked #10 in the division (probably even higher now after beating #8 Cass Bell), Lugo is riding on cloud 9. Following Bellator 256, Lugo admitted that he even thought Bellator forgot about him, but the last few months, and the recent win, changed that thought process.

“I was scared I wasn’t even going to get the call to be signed,” Lugo explained. “They call me finally a month after my last fight, they called me and gave me a deal. When they came out with the ranking system I didn’t expect to be in the top 10 to be honest,” Lugo continued. “I’m like ‘they know I exist?’ I didn’t even think they know I’m alive. Before this fight, I didn’t get no pre-fight interview, I’m in the top 10! What is going on?”

Lugo dominated his way to a victory with fellow ranked opponent, Cass Bell. Lugo was relentless with his leg kicks, and found holes in Bell’s performance to capitalize on. However, despite defeating an opponent ranked two spots ahead of him, Lugo expects to stay at #10 in the rankings.

“There are a couple of people who haven’t fought yet,” Lugo explained. “When they fight they will be in the top 10 as well. I expect to be put at #8 after this, but once they fight I’ll be put back at 10. I don’t care, it’s just about beating every single opponent.” 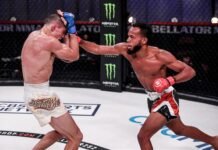 Bellator’s Jornel Lugo “Like a Chameleon,” Can Beat “One Dimensional” Top Five 135ers