Uncasville, CT — The first card of Bellator’s Showtime era is in the books. Bellator 255 went down Friday, and set up exactly the featherweight grand prix finale that everyone was looking for.

In the main event, Patricio Pitbull choked out Emmanuel Sanchez to advance to the finals against AJ McKee. It took less than a round. “The main event I felt was surprising a little bit,” said Coker, admitting following the event that he expected the fight to make it to the later rounds. “Pitbull, he’s a beast.”

Of all the fighters Coker has promoted, he later added, “I think he’s got to be in the top two or three. Because when you think about what this kid has done, day in and day out, I’ve never seen this guy in a boring fight. He always brings it, he always throws power, tries to knock you out, tries to submit you. He’s always advancing his position to win, and not just outpoint you through five rounds.”

When you add on Pitbull claiming gold in the lightweight division as well, “I think that it’s something that’s very special, and I think you all saw it tonight, how special of an athlete this guy is.”

Coker has been snake-bitten by tournaments before. In his Strikeforce days, Alistair Overeem and Fedor Emelianenko were placed on opposite sides of the heavyweight grand prix bracket. Only for the much-anticipated showdown to fail to materialize after Fedor was eliminated early. This time, with Pitbull and McKee, things worked out. “I know that that’s the fight that the public wants to see. It just worked out this way.”

As for when the finale will go down, after speaking to Patricio Pitbull’s manager, “probably June or July” was the reply. “So this fight will happen in the summertime for sure,” stated Coker. “This featherweight tournament has been going on for a while, as you know, because of COVID. But it will be such a great fight, and we’re going to promote the heck out of it, because this is a match-up that’s going to be unbelievable.” 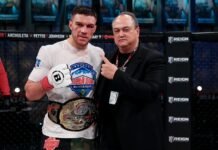 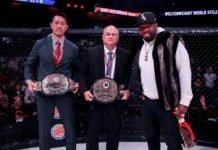