It’s impossible to ignore the UFC’s middleweight division in April. With a several interesting 185-pound matchups taking place throughout the month, including two main events, what will the landscape of the division look like come May?

Following a month where middleweight champ Israel Adesanya was derailed in his attempt to become a two-division champion, a few ranked 185-pound fighters will have the chance to stake their claim at getting the next title shot.

From high-profile main events on network television to former champions and rising prospects, the UFC’s middleweight division has it all in April. The matchups are interesting, while also defining the rest of the 2021 slate for the 185-pound title picture.

Generally speaking, when we get fights that are interesting and matter, we learn some things. Given the packed schedule of meaningful middleweight fights in April, we should be learning quite a bit.

Who’s next for Israel Adesanya?

Adesanya has already mentioned Darren Till, one of the few fighters in the title picture he hasn’t already defeated, as a potential next opponent. He’ll have the chance to take the pole position on April 10 when he fights the red-hot Marvin Vettori on network television.

Currently ranked #5 and #6 in the official UFC rankings respectively, Till and Vettori might not be the first fighters people think of when it comes to getting a title shot in 2021. But with a champion like Adesanya, who can call his own shots more than most in the UFC, putting on a performance that gets his attention is worth more than a higher spot in the rankings.

The fighter at the top of the rankings is former champ Robert Whittaker. He’s tallied wins over Till and Jared Cannonier since his loss to Adesanya in October of 2019. Another win, say against Kelvin Gastelum on April 17, would solidify his argument for a rematch.

Whether it’s the winner of Till-Vettori or Whittaker-Gastelum, Adesanya’s next opponent is likely coming from one of the two middleweight main events in April. We’ll give the advantage to Till, but don’t be surprised if any of the four fighters make the most of the spotlight and are fighting Adesanya later this year.

Is Marvin Vettori ready to join the title picture?

Although his #6 ranking might make it seem like Vettori is on the outside looking in when it comes to the middleweight title-picture, the 27-year-old Italian is in a better position than it looks. He’s on the best run of his nearly five-year UFC career, and a main event match-up with a high-profile opponent like Till is a great way to announce his presence in the title picture.

He has a well-rounded game, and seems to be putting everything together. Vettori will have to keep up his impressive form to consistently compete with the likes of Till, Whittaker, Gastelum, and more, if he has his eyes on a title-fight rematch with Adesanya. Given his recent run, we’re betting he sticks around for a while.

What does Chris Weidman have left?

It wasn’t exactly a classic performance, but Chris Weidman’s win against Omari Akhmedov was good to see. It was his first since defeating Gastelum in July of 2017, and just his second victory since losing the middleweight title to Luke Rockhold at UFC 194. The last time Weidman had back-to-back wins, he was the 185-pound title-holder.

At UFC 261, the 11th-ranked Weidman takes on ninth-ranked Uriah Hall in a rematch more than a decade in the making. Weidman previously defeated Hall, earning the Ring of Combat middleweight championship via first-round TKO in September of 2010. It was just Weidman’s third fight as a pro.

Weidman is clearly in a different phase of his MMA career, and while the win over Akhmedov was good to see, it’s hard to get excited about the former champ taking on top-10 ranked 185-pounders. A decisive win over Hall, who’s won three straight, would go a long way toward proving he has more in the tank than his recent performances would lead us to believe.

While several middleweight match-ups are taking place in April, a couple of contenders will be joining Adesanya in watching how things shake out.

After his disappointing showing against Adesanya in his last fight, Paulo Costa was set to return against Whittaker in April. The match-up with the former champ gave Costa a quick route to a rematch, and a high-profile main event to work with. Unfortunately for Costa, he was pulled from the fight due to an illness, and will instead be waiting to see who’s available later this year.

Someone currently available: Derek Brunson. The veteran is on a roll, winning four straight fights, and ending Kevin Holland’s impressive run in his most recent bout. Following that win over Holland, the now-fourth ranked Brunson called out the second-ranked Costa. The match-up makes as much sense as any for the weight class, but with the division going through some changes in April, we’ll likely have to wait and see how things go before Brunson or Costa are booked for their next fights.

Don’t forget about Jared Cannonier, either. Coming off of his loss to Robert Whittaker at UFC 254 in which he suffered a broken arm, Cannonier’s 2021 return should be on the radar of everyone in the middleweight title picture. 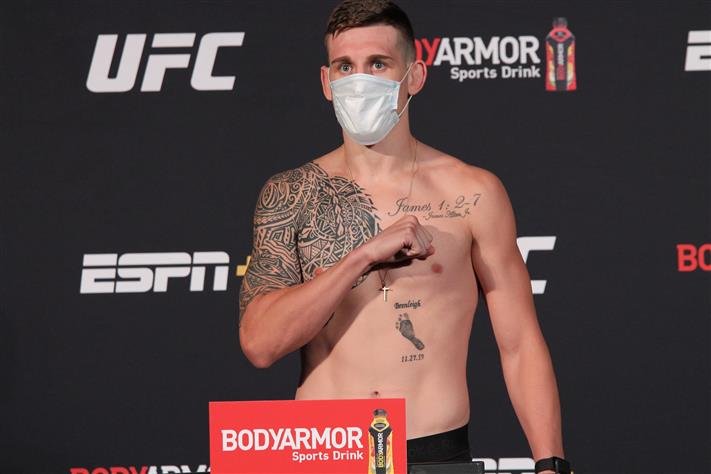 Are Brendan Allen or Karl Roberson ready for a run at the top-15 rankings?

Although neither Brendan Allen or Karl Roberson are currently ranked, it’s easy to see how both of them could be ready to join the group soon. When they fight at UFC 261, we’ll get to see which of them is currently more prepared to do so.

Allen, a former LFA middleweight champion, is 3-1 in the UFC after earning a contract via Dana White’s Contender Series. The wins are good ones, too, featuring the likes of Kevin Holland, Tom Breese, and Kyle Daukaus. The 25-year-old’s impressive run came to a halt last November, when he was finished by Sean Strickland in the second round in a 195-pound catchweight bout.

Roberson, 30, is coming off of a loss as well. That loss, to Vettori in June of last year, ended a two-fight winning streak for Roberson. The Dana White’s Contender Series vet is 4-3 in the UFC, and 4-2 at middleweight, adding a loss to Glover Teixeira in January of 2019 between middleweight wins.

While avoiding back-to-back losses will be top of mind for both Allen and Roberson, whoever earns the win at UFC 261 will be nearing a deserved spot in the middleweight rankings.

Regardless of what happens, April will be a defining month for the UFC’s middleweight division. With a couple of main events, some veterans, and some rising stars, there’s a lot to be interested in when it comes to the 185-pound weight class. We, along with champion Israel Adesanya, will be watching to see how things shake out, and how these match-ups shape the rest of the year for the division.