Gillian Robertson and Miranda Maverick were supposed to throw down back in February. But after Robertson fell ill, the fight was pushed back — bringing us to UFC 260. On Saturday, the flyweight pair were the only ladies on the UFC 260 card. Two young prospects, looking to solidify their place in the division.

Plenty of kicks were traded early between Robertson and Maverick on Saturday. Both fighters stayed active on their feet, and it was almost a surprise to see things stay standing through the first ninety seconds. As the round progressed, it was Maverick moving forward more, combinations flowing. Robertson circled and countered, but didn’t have the same volume early. With 90 seconds remaining, Maverick caught a kick, dumping Robertson on her back. The Canadian scrambled out the back door, however.

In round two, Robertson was able to take to back, and drag Miranda Maverick to the ground with a body lock. Robertson slowly worked to the top, while Maverick displayed her strength by trying to power the Canadian off. Maverick managed to push Robertson off briefly, but Robertson took the back. Plenty of slick grappling exchanges in close quarters. Robertson was looking far more comfortable, but Maverick did not make things easy. With less than a minute remaining in the round, Robertson briefly threatened with a rear-naked choke. But Maverick escaped, going after Robertson full-force with one last combination.

Maverick opened the third with a high kick followed up with a jab. The aggressive start put Robertson on her heels. She shot for a single leg, but lost it. A second takedown attempt allowed Maverick to take the back, hooks in. She then transitioned to mount, and while Robertson latched on to a leg, Maverick dropped hammer fists. Robertson survived, and from her back, threatened with an arm bar. In a scramble, Roberton then took the back. Another scramble later, and Maverick allowed the fight back up. She then charged into a takedown, ending any chance of Robertson pulling off the comeback. 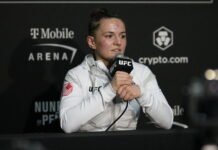 UFC 269: Erin Blanchfield Happy With Win, Not Waiting For Barber 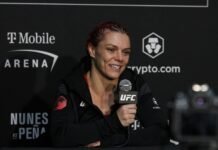 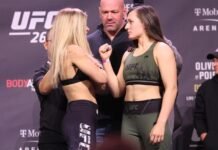