Dan Ige vs. Gavin Tucker had the makings of one of the best fights of the night at UFC Vegas 21, but Ige only required 22 seconds to get back in the win column.

Dan Ige was supposed to have faced grappling standout Ryan Hall at UFC Vegas 21 on Saturday. Instead, he was paired up with a very different kind of fighter: Canadian featherweight Gavin Tucker.

Tucker had hit his stride after a 1-1 start to his UFC career that featured a dominant win over Sam Sicilia and a brutally one-sided loss to Rick Glenn. A lengthy layoff saw him return in 2019, and the Canadian is 3-0 since then with two submissions.

Ige debuted in the UFC back in 2018 with a competitive loss against Julio Arce. He then rattled off six straight wins with split decisions over Edson Barboza and Mirsad Bektic. Those victories earned him a main event slot against featherweight contender Calvin Kattar, but he ended up losing a unanimous decision in July.

With Ige’s heart and Tucker’s technical abilities, it was a fight that had Fight of the Night potential.

After a few feints from both fighters, Tucker came in with a left hand that Ige countered beautifully. A right straight shut Tucker down and he was out almost immediately. An incredibly quick finish for Dan Ige, who needed a big win after his last fight.

ONE AND DONE FOR 50K 🤑 #UFCVegas21 pic.twitter.com/PLs7mkJ5Ez

Ige immediately reminded fans why he was seen as one of the top rising contenders in the featherweight division. 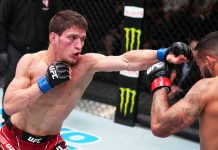