Thiago Santos has practically been the poster child for displaying just what the elimination of an excessive weight cut can do for a fighter’s career. As well as just how much fighters grow throughout their career and how it can be tough for them to manage, adjust and find the correct weight class. Santos actually first started with the UFC after his time as a welterweight on TUF Brazil Season 2 in 2013.

Santos immediately moved up to middleweight once in the UFC but at 29 years old, he was actually still weighing in at 183lbs for a couple of the bouts. Fast forward five years and Santos is struggling to make 185lbs but still beating solid guys consistently such as Jack Hermansson, Anthony Smith and Kevin Holland. Santos moved up to light heavyweight in September of 2018 and it turned out to be a great move. Light heavyweight has a little less crowded path to the title and with literally three finishes (Eryk Anders, Jimi Manuwa, Jan Blachowicz) Santos was ready to challenge Jon Jones for the belt. Though he was unsuccessful, Santos did give Jon Jones one of his toughest tests to date, on a severely injured knee, too.

At 6’2″ with a 76″ reach Santos definitely isn’t the biggest light heavyweight nor does he have the largest frame as fans will see when he stands across the cage from one of the members of the newer breed of MMA- Aleksandar Rakic.  Now 37, Thiago’s striking has served him well and his power is just as present as ever, especially at a weight where he doesn’t have to deplete to make the limit prior to the fight. 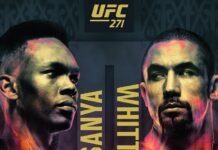