Lightweight action is the latest addition to the UFC’s May 1 card, as Gabriel Benitez and Jonathan Pearce will face off at the event.

On Tuesday, MMA Fighting was first to report the booking, which will see both “Moggly” Benitez (22-8) and Pearce (10-4) look to string together back-to-back wins. Cageside Press subsequently confirmed the date, which is expected for the UFC Apex.

Benitez enters the bout off a Performance of the Night effort against Justin Jaynes at UFC Vegas 16 in December. The 32-year old Mexican from American Kickboxing Academy set up the finish with a knee to the body. That snapped a two-fight skid for Benitez. Overall, he sits at 6-4 since entering the UFC in 2014 after appearing on The Ultimate Fighter: Latin America.

Pearce, for his part, is just two fights into his UFC career. Drawing the short straw in his debut, he was paired up against veteran Joe Lauzon, and wound up finished via ground and pound within a round. In his sophomore outing, however, Pearce earned his own TKO over Kai Kamaka III at November’s UFC Vegas 15.

The UFC’s May 1, 2021 event doe not have a location, venue, or broadcast plans officially announced. The card is expected to feature the following bouts: 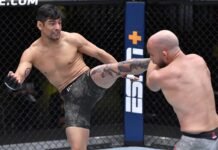