Women’s flyweight action at UFC Vegas 20 saw Montana De La Rosa and Mayra Bueno Silva face off. The bout was expected to rely heavily on the ground game, given the grappling prowess of both ladies. Instead, what resulted was a fight that saw the most entertaining moments come on the feet, many of them in the clinch.

In a takedown attempt, De La Rosa found herself in a guillotine early. The American finished the attempt, however, head pulling free in short order. She could not keep Bueno Silva down for long, though, as the Brazilian quickly returned to her feet. That led to a second takedown attempt from Montana De La Rosa, which was prevented only by a fence grab by Bueno Silva — resulting in an immediate point deduction.

Despite being up in the round, De La Rosa was under fire on her next takedown attempt, eating elbows and a knee. That time, Bueno Silva was able to defend the takedown without the fence.

Early in the second, De La Rosa ate a head kick and a couple of solid punches from Silva. Mayra Bueno Silva then muscled her opponent down, but couldn’t keep her there long. Bueno Silva continued to threaten with head kicks, and her strikes had a fair bit more behind them than De La Rosa’s. The American’s eye had also swollen up, but she fought through it, landing a takedown with about ninety seconds left in the round.

Montana De La Rosa was once again under fire to start the third. She was able to bully Bueno Silva back to the fence and go back to work on a takedown. Bueno Silva defended with a choke, then punches, and a knee, cutting De La Rosa open. A nasty left connected after De La Rosa quit on the takedown attempt. Another knee connected moments later as De La Rosa pursued another takedown. She’d finally land a takedown in the open later in the round, but with only 30 seconds or so remaining, there wasn’t enough time to work.

The point deduction in the first was the difference maker. What would have been a win for Mayra Bueno Silva turned out to be a majority draw instead. 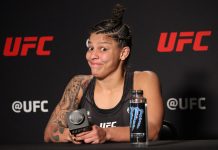 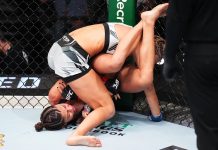