Atop the UFC Vegas 19 card sat a pair of heavyweights looking to build on impressive win streaks. Derrick Lewis entered Saturday off three straight wins. Curtis Blaydes had done one better than that. Yet neither, despite their recent success, was likely to make a claim to a title shot. In essence, Blaydes vs. Lewis was a battle for second place, with Jon Jones being awarded the next shot at gold, after Miocic vs. Ngannou 2.

Of course, anything can happen in MMA, and the pandemic era was just as much the era of opportunity. A Jones injury, or any number of other circumstances, could change things overnight. And even with the stakes unclear, Blaydes vs. Lewis promised to be an interesting clash of styles.

Blaydes opened the affair with a leg kick, landing it. But Lewis answered with a number of punches that sent Blaydes retreating. Safe to say, that wasn’t an enjoyable experience for Curtis Blaydes. He regrouped, and put Lewis’s back on the fence, pumping his jab. Lewis fired a high kick that forced Blaydes back. But in the next exchange, with Lewis swinging wild, it was Blaydes landing a solid punch. And the leg kicks, which Blaydes had opened with and continued to use off and on throughout the round, were finding the mark. Late in the round, a knee, and an elbow, sent Lewis reeling, covering up.

Round two saw Blaydes come out swinging hard, then transitioning to a takedown — which Lewis defended expertly. Later, Blaydes would duck down for another shot — which Lewis timed perfectly. An uppercut from “The Black Beast” connected flush on the chin, and Blaydes went stiff as a board. A couple nasty follow-up strikes landed on the downed Blaydes before the ref could make the save.

The win for Lewis marks his 20th knockout, and shakes things up a bit at the top of the heavyweight division. While a title shot might not be next, the KO of Blaydes was absolutely a statement win — and a reminder that Lewis can knock out anyone. 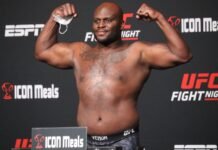 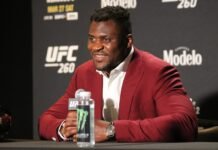