A pair of highly ranked women’s bantamweights are set to fight in May, with each looking to get closer to champion Amanda Nunes.

First reported by Brett Okamoto of ESPN, former bantamweight champion and No. 2 ranked Holly Holm will take on No. 5 ranked Julianna Pena on May 8, 2021. No location has been announced for the event as of yet.

Holly Holm (14-5) got back to her winning ways in 2020 by getting her hand raised twice. She kicked off the year with a unanimous decision victory over Raquel Pennington at UFC 246 last January. Holm was scheduled to face top-ranked 135’er Irene Aldana on August 1, 2020, at UFC Fight Night: Brunson vs. Shahbazyan in the co-main event, but Aldana tested positive for COVID-19. The UFC chose to remove Holm from the card and reschedule the fight with Aldana for a main event match-up on ‘Fight Island’ on Oct. 4. “The Preachers Daughter” ended up defeating Aldana via a unanimous decision. The win was one of her most dominant to date.

Pena (10-4) was put to sleep by No. 1 ranked Germaine de Randamie, on the very same night Holm defeated Aldana. “The Venezuelan Vixen” got back in the win column at UFC 257 last month as she defeated Sara McMann via submission.

The pending May showdown represents a big fight for both women. Holm is hunting for a rematch with Nunes, and Pena would like to finally get her first shot at the champ. With a win over Holm, Pena might just get to face Amanda Nunes, who she said “ducked” her in her most recent post-fight interview.

The UFC’s May 8 card has no official location yet. The only other known fight is a flyweight bout featuring Zarrukh Adashev vs. Ryan Benoit. 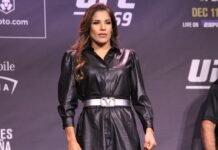 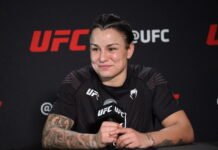