LFA 100: Altamirano vs. Smith goes down this Friday on UFC Fight Pass. Initially, Carlos Mota was fighting Victor Altamirano for the LFA Flyweight Championship. However, due to Visa issues, the bout with Mota was canceled. Instead, Nate Smith of Contender Series fame steps up. The top of the event is seeing tons of attention, so let’s take a closer look at a trio of fights that could steal the show.

LFA 100: 3 Scraps Flying Under The Radar

First, Steven Nguyen (6-1) is a 5″11″ featherweight, competing with great physical attributes. Conversely, his opponent Jorge Juarez (5-2) is a scrappy grappler but also dangerous on the ground. Next, Rashaad Robinson (3-1) vs. Alden Coria (3-0) is a battle of blue-chip prospects. Chiefly, the 22-year old Coria has shown great promise inside the cage. With an unbeaten record in the sport so far, the LFA pairing is essential. Similar in experience and skill-range, Robinson and Coria will both enter the cage looking to emerge as the next big player in the flyweight division.

The final fight in the under-the-radar segment at LFA 100 will the unbeaten Gerald Scott (4-0) taking on Tommy Aaron (6-4) in a lightweight bout. The six-fight main card is packed with all sorts of action, now let’s look at the trio in more detail.

Having an undefeated record translates into a lot of pressure. Fans witnessed the pressure boil over after Nguyen lost to Aalon Cruz by a flying knee knockout. While often a tough pill to swallow, it’s the catalyst that triggers the transformation for many fighters coming up. Nguyen’s aggressive style can sometimes land him out of position but the Kansas native is hard to pin down. Basically, he is so effective at exiting shuffles and scrambles, it makes for an evasive foe during a cage fight. Additionally, since the 27-year old’s last loss was on the Dana White’s Contender Series it shows just what level he really is striving to compete at.

On the other hand, Juarez is making his LFA debut. Though it’s important to realize that this isn’t his first rodeo. The athlete has competed in a number of top promotions like Bellator MMA before. Recently though, at World Fighting Championships,(WFC 119) Juarez put an exclamation point on his grappling dangers by snatching a rear-naked choke finish over Raphael Smith. Overall, Juarez’s activity coupled with his slick transitions makes him a dangerous fight for any featherweight at LFA 100.

Coria’s ability to secure top position on the mat is dangerous, but the 27-year old Robinson’s activity may help him thwart away his opponent’s game plan. Mainly, it is because the brawler, Coria uses flurries to put the opponent on the defense and backing up. Why? Because Coria’s close-range shots help initiate the clinch. While inside the clinch, the unbeaten Coria uses a very tight lock of the bodies to eventually secure a takedown. Nicknamed the “Cobra”, the American lives up to his name by twisting his opponents up until transitioning into full-mount. Ultimately, his top pressure and air-tight full mount are some of his most effective methods inside the cage.

Facing the tricky grappler is the 27-year old Robinson. A distinct advantage in Robinson’s corner is his activity. After a lengthy (and somewhat rocky) amateur stint, Robinson went pro in 2019. After two wins, he suffered his first defeat. But at XKO 49 the flyweight picked up a dominant victory over Aldheir Romero on Jan.28, 2021. It would seem now at LFA 100 is the most ideal time for Robinson to show some evolution in his game.

A very interesting big step up for Scott, because Aaron will enter the cage with more than double the experience. Since bursting onto the MMA scene, Scott has looked spectacular. With a five-fight win-streak and four of them coming professionally, clearly, the talent ceiling could be high with the young, unbeaten 26-year old. Additionally, Scott is training out of Colorado at elevation while focusing on boxing and kickboxing. Overall Scott looks to be in a prime position to continue his unbeaten streak.

On the other hand, Aaron comes in with a wealth of cage experience. Specifically, he lost in Bellator but was able to make it into various promotions where he mostly alternated in success and failure. For example, he was able to secure a rear-naked choke against Troy Guerrero at LFA 36: Simon vs. Zani. Following his success, Aaron faced the dangerous Samuel Alvarez and as a result, would lose by a corner stoppage, where he sustained an ankle injury. Now, looking for redemption, the seasoned veteran, Aaron will look to snap Scott’s nice 5-fight win streak and get back into the win column.

Don’t miss the action at LFA 100: Altamirano vs. Smith on UFC Fight Pass! The event takes place this Friday, February 19, 2021. 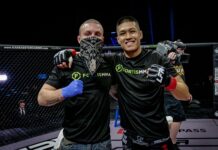 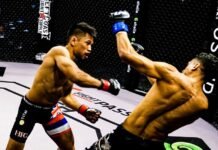