Bryan Caraway was once known a contender in the UFC bantamweight division, with wins over names like Aljamain Sterling and Eddie Wineland.

Since being released by the promotion in 2018, though, Caraway (22-9) has barely been heard from. The exception being a lone win outside the UFC at Battlefield 2 in 2019.

Caraway is back in the news, however, for all the wrong reasons. The former bantamweight is facing charges of forgery, first-degree attempted theft, filing a false insurance claim and making a false statement on a vehicle application certificate of title. The news was first reported by the Office of the Insurance Commissioner for Washington State in a press release earlier this month. At the time, Caraway was on the organization’s most wanted list, although he has since made arrangements to appear at an arraignment hearing on March 11.

The incident stems from Caraway reporting an ATV stolen, and filing an insurance claim on the vehicle. Per an investigation by Washington Insurance Commissioner Mike Kreidler, “Caraway reported the theft of a 2015 Polaris RZR all-terrain vehicle from his property in Richland in December 2018. He bought a policy for it from GEICO on Dec. 21 and filed the claim on Dec. 24. He told GEICO that he bought the vehicle and contents, including helmets, a battery charger and spare tire, for $18,500 and provided a title showing his ex-girlfriend gifted it to him in January 2018.”

There was just one problem: GEICO’s own investigation determined that the title was forged. The vehicle was not stolen, but rather legally in possession of Caraway’s ex-girlfriend: former UFC women’s bantamweight champion and current ONE Championship executive Miesha Tate.

When Caraway withdrew his claim, GEICO referred the case to Kreidler and the Criminal Investigations Unit of the Insurance Commissioner.

None of the allegations against Caraway have been proven in court. However, an additional report by MMA Fighting notes that Caraway was under investigation in Nevada for twice stealing the ATV from Tate’s Las Vegas residence. Caraway was charged in June 2019 following an investigation by Las Vegas police. However, those charges were dismissed this past November. 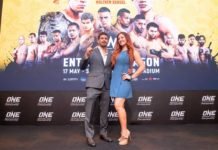