Leon Edwards gets to stay on the UFC’s March 13 Fight Night after all.

According to Brett Okamoto of ESPN, Belal Muhammad will step in and fight Edwards in the main event on March 13, replacing Khamzat Chimaev.

Edwards (18-3) finally gets to return to the octagon after a lengthy layoff. Edwards might have had the worst luck in 2020. His fight against Tyron Woodley topped the first UFC fight card canceled when the sports world shutdown. Edwards was stuck in Europe, and Gilbert Burns stepped in to fight Woodley, which earned him a welterweight title shot.

The UFC removed Edwards from the rankings due to inactivity, which led him to take a fight against prospect Chimaev, who was the talk of the town. As soon as Edwards accepted the fight, he returned to No. 3 in the rankings. The pair were originally supposed to compete in the main event of the last fight card of the year on Dec. 19, 2020, but a positive COVID-19 test from Edwards put a halt to the fight. They were rescheduled for Jan. 20, 2021, on ‘Fight Island’; however, Chimaev tested positive this time. The fight was rescheduled a third and final time for March 13, but Chimaev with suffering from lingering effects of COVID-19, the fight was finally scrapped. Edwards told the UFC he wanted to stay on the March 13 card because he needed to compete.

Muhammad (18-3) will turn right around after successfully defeating Dhiego Lima at UFC 258 via a unanimous decision. He is currently on a four-fight win streak with wins over Lyman Good, Curtis Millender, and Takashi Sato. “Remember the Name” is looking to stay active after only fighting once last year.

The March 13 fight card takes place at the UFC Apex in Las Vegas and currently looks like this: 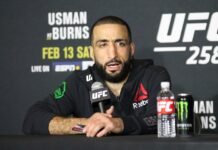 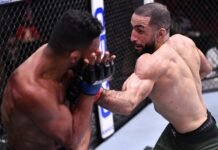 UFC Vegas 19’s Darrick Minner on Opponent Rosa: “I Went Through the Grinder to...