Las Vegas, NV — Yes, the shared time in the gym between Kamaru Usman and Gilbert Burns will factor in during the UFC 258 main event, Daniel Cormier believes.

“It plays a part. It does play a part, if I’m being honest,” Cormier said Friday, in a media scrum following the event’s official weigh-in.

“Here’s the deal. Generally the challenger, or the guy that isn’t holding the belt, doesn’t call for it unless he sees something that makes him believe that he has a shot,” explained Cormier, the former UFC double champ turned broadcaster.

Ultimately, “one of those guys know who won those sparring sessions,” Cormier added. The key, he said, is “getting to a position where you might have had more success.” That’s where the advantage from training together will lie, believes Cormier. “Where and how good are you at getting to that position that will remind the guy, ‘oh I struggled with this before,’ to try and play a mental part on him.”

Welterweight champion Usman, meanwhile, is not getting the respect he deserves, Cormier believes. “I think Kamaru Usman is fantastic. And I think that the way he is perceived in the world of mixed martial arts, and not only mixed martial arts but in sports, is a bit of a disservice. Because the guy has not lost a fight since he got here. He is a dominant champion, a guy that has shown on so many occasions that he can fight with anybody.”

The Colby Covington fight, Cormier suggested, showed “a different level of who Kamaru Usman is too,” given that Usman had to find outside of his comfort zone. “He fought where he was uncomfortable for 23 minutes and finished a very tough Colby Covington.”

“Kamaru Usman is underappreciated, if that’s even a thing when you’ve won and defended the belt in the fashion that he has to this point,” Cormier finished. 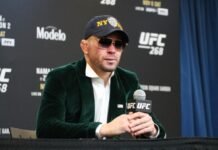 UFC 268’s Colby Covington on Usman: “I Can’t Respect A Guy Like That” 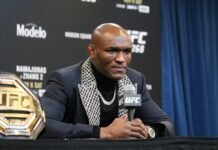