Las Vegas, NV — UFC middleweight Ian Heinisch is looking to build off a win over Gerald Meerschaert last year when he takes on Kelvin Gastelum this weekend.

It’s a big name for Heinisch, the biggest the Contender Series product has faced yet. Coming on the UFC 258 PPV card makes it arguably even bigger.

“He’s a legend of the sport, he’s fought everyone, the who’s who, and almost beat the champ,” Heinisch told media outlets this week during the UFC 258 media day. “So this is a huge stepping stone up for me.”

Gastelum, of course, has fought for gold in the UFC. It’s the sort of situation Heinisch has envisioned himself being in before. “I knew the middleweight division was so full of opportunity, seeing Kevin Holland and Marvin Vettori make these jumps. I knew my time was coming, I thought it was going to come after the Brendan Allen [fight], but that fight didn’t work out,” explained Heinisch. “But when one door closes, another opens, and it was a big opportunity and I jumped on it.”

There’s no avoiding the fact that Gastelum is currently on a three-fight skid. But that doesn’t make him any less dangerous, suggested Heinish. Quite the opposite really.

“When someone’s back is against the wall, that’s usually when they fight the hardest, train the hardest. And I know that’s where he’s at now.” End result, Heinisch is training for “the best Kelvin Gastelum ever.” That, even though Heinisch understands that with his recent losing streak, Gastelum is likely going through some stuff in his own head.

As for his own game, and how that has changed, “you’re going to see some big improvements. We’ll be talking after the fight.”

Watch the full UFC 258 media day press scrum with Ian Heinisch above. The event takes place this Saturday, February 13 at the UFC Apex in Las Vegas. 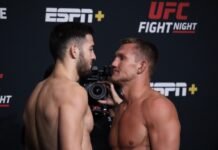