Bader (27-6, 1NC) starts the tournament against Lyoto Machida, a fighter who defeated him back when “I literally knew nothing about striking compared to where I am now,” he said during a media session Tuesday, following Bellator’s unveiling of the grand prix.

Then there’s Vadim Nemkov. “Of course, he has the belt right now. Definitely I want revenge on that. With the proper preparation for that fight, and weight cut going in there, I feel like it would be a different story.”

Bader knows there will be tough competition each and every fight. And there’s the possibility of another rematch, against Anthony Johnson. Like the Machida loss, Bader’s defeat at the hands of “Rumble” came back in the UFC. “This is a redemption year, especially in this tournament. I’m probably going to get to fight two of them, potentially,” Bader noted. That’s just the way the tournament brackets are set. Both Nemkov and Johnson are on the opposite side of the bracket from Bader, so only one will be available should he make it to the finals. 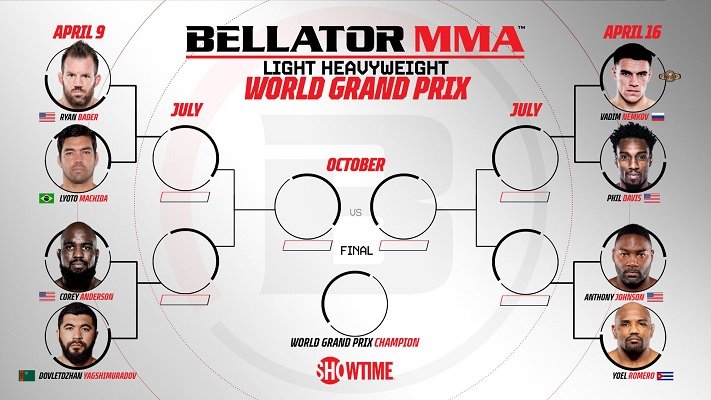 Johnson’s appearance in the grand prix might be a surprise to some, especially after he bulked up as a weight lifter during his retirement from MMA. Upon announcing his return to the sport, “Rumble” initially targeted the heavyweight division.

Bader was a bit surprised himself. “Yeah, I thought he would go heavyweight. He got big for a while, doing bodybuilding and all that kind of stuff,” the former champ told Cageside Press on Tuesday. “I figured he’d never come back now.”

That having been said, “Darth” Bader isn’t overly worried about Johnson’s size. “I grappled him in Submission Underground in December, and he was about the same size I was, maybe a little bit lighter. 230, so he can definitely make that weight no problem,” Bader observed. “He’s slimmed down a bunch. I’m excited for him. When I came over to Bellator, I was reinvigorated, I was ready to rock, and I still am. I’m excited for these new guys to move over and continue their career, and be happy.”

Bader obviously knows a thing or two about the cut from heavyweight to light heavyweight. He’s carried both belts in Bellator, at least until the loss to Nemkov. And the plan is to head back to heavyweight following the grand prix. “I’m not going to stick around unless it’s for the tournament. If I lose that tournament, I’m going to go up and defend that belt as soon as possible,” stated Bader. “Definitely, the heavyweights deserve that.”

Watch the full Bellator on Showtime media day scrum with Ryan Bader above.