Timur Valiev’s UFC debut was a wild one, with the former PFL standout nearly finishing Trevin Jones in the opening round of their August 2020 showdown, before being finished himself the following round. While the outcome was later changed to a no contest due to a Jones’ positive for marijuana, it mattered not: the highly touted Valiev was still in search of his first UFC win. At UFC Vegas 18, he’d get a second shot at that, against Martin Day. For his part, Day was stepping in on short notice in place of Julio Arce.

Day, with the height and reach advantage, opened with a high kick. But Valiev’s movement allowed him to connect with some low kicks of his own early. Valiev mixed it up, throwing a kick to the midsection that came up short, then followed with a heavy leg kick. Valiev then shot for a takedown and latched on to a leg. Day scrambled to the fence, with Valiev staying on him with a body lock from the back. That allowed Valiev to finish the takedown, although Day quickly popped back up.

Showing some smart grappling, Valiev trapped one of Day’s legs with his own, and targeted the body and head with punches before landing a second, albeit brief, takedown. A third trip to the mat lasted longer, with Day on his back, employing an active guard.

After a dominant opening round by Valiev, Martin Day was going to need to regroup, and find a new approach. But Valiev went back to the well in the opening minute of round two, landing a single-leg takedown and putting Day on his back. All the height and reach in the world wasn’t helping Day there. Unlike the opening round, Day couldn’t make it back to his feet. That gave Valiev a full round of top control, where he landed enough ground n’ pound and worked enough to prevent any intervention by the ref.

Day would need a Hail Mary finish in the third to have any hope of winning the fight. Instead, he was quickly planted on his back once again. Credit to Martin Day for taking the bout with a very dangerous Dagestani fighter on short notice. But it was Timur Valiev’s night. And his dominance was reflected on the scorecards, which included a pair of 30-25 scores. 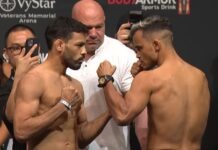 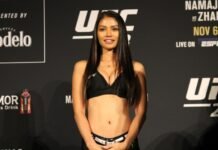 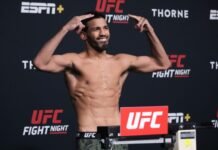