The first UFC co-main event on ABC just screamed violence. For Carlos Condit vs. Matt Brown on UFC Fight Island 7, that’s the vibe pretty much every fan got, after the bout was finally booked for the third time.

Way back in 2013, the welterweight pair were expected to meet, but a Matt Brown back injury delayed the fight. In 2018, the bout was scheduled once again. It was not meant to be though, as Brown tore his ACL, delaying this dream match up once more.

The third time was the charm. Saturday, the wait was over. The Natural Born Killer against the Immortal. It may have taken nine years, but for MMA fans patience is a virtue and the mystique surrounding the co-main event was worth the wait. Check Carlos Condit vs. Matt Brown off the MMA dream fight list.

After three rounds of grueling grappling exchanges, nasty elbows, and some fancy takedowns, Carlos Condit captured the unanimous decision victory over a very tough Matt Brown. It might not have been prime Condit and Brown, but the fight was certainly entertaining.

Check below to see how the pros reacted to the co-main event between the two fan favorites, Carlos Condit and Matt Brown.

That was a good fight from two welterweight legends @ufc #fightisland

Loving this Condit vs Brown fight. Great matchmaking. Fights that make sense for guys who have been in the game a long time. I want more of this in our sport.

Hell of a scrap. Respect to both veterans. 🔥 #UFCFightIsland

Carlos Condit always brings the fight . OG of the sport of MMA . Looking forward to this one! #UFCFightIsland7

Condit and brown some beast 👊🏼💯 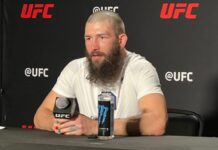 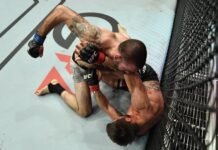