After scoring one of the greatest knockouts of all time last year against Impa Kasanganay, you might feel as though there’s some pressure on Joaquin Buckley to repeat that particular feat. After a follow-up finish against his next opponent, however, Buckley feels he’s shown what he’s capable of.

“I already took the pressure off myself, I already proved what I’m capable of when I fought Jordan Wright,” Buckley (12-3) explained during a virtual media day for UFC Fight Island 7 this week. Wright was the follow-up fight to the “kick heard ’round the world,” and it was another big stoppage for “New Mansa.”

Speaking to Cageside Press and other media outlets, the 26-year old middleweight, winner of two straight Performance of the Night bonuses, stated that the plan moving forward is “to just go out and have fun, and do what we do best.”

Finishing fights, in other words.

It’s really no surprise that Buckley’s two-touch kick on Kasanganay earned Knockout of the Year from multiple media outlets (including this one). Nevertheless Joaquin Buckley was still caught somewhat off-guard.”

“That’s definitely something to get used. Definitely, since I’ve been under the radar for a very long time,” he admitted. “I’ve been trying to push my name out by myself for a very long time. It’s cool to see people actually wanting to figure out who I am and try to explore on my background. So it’s pretty cool, man, to have all these different outlets reach out to me.”

Thus far in his young UFC career, Buckley has fought at an impressive pace. And there’s a reason behind that steady clip. “I’ve got to stay consistent, I’ve got to keep the eyes on me. The only way to do that is to fight,” he explained. To ensure he can stay ready for a fight, Buckley forgoes hard sparring, keeping himself injury-free. And clearly, the process seems to be working. After fighting in August, October, November, and now January, he’s become one of the busier members of the UFC roster. This, throughout the ongoing coronavirus pandemic.

This Saturday, Buckley goes up against Italy’s Alessio Di Chirico — a fighter who has hit hard times of late, dropping three consecutive bouts. Despite that, Buckley sees a respectable opponent, given that “even off the three losses he had back-to-back, it’s all been unanimous decision, split decision type losses. I really think that he’s going to come really hard with some heavy pressure to knock me out.”

Should that happen, Buckley added, he’ll answer in kind. “Unfortunately when you come to kill, you open the gate to be killed yourself. So if he’s looking to take me out, I gotta do the same thing.”

Joaquin Buckley vs. Alessio Di Chirico takes place at UFC Fight Island 7 (UFC on ABC 1) this Saturday, January 16 in Abu Dhabi. The event airs on ABC in the U.S. and TSN in Canada. 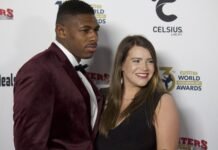