Fans will officially be back in attendance for the first time since March as the Department of Culture and Tourism in Abu Dhabi announced a limited number of spectators to be allowed in the arena.

The Department of Culture and Tourism in Abu Dhabi has announced that fans will be in attendance for the UFC’s return to Fight Island starting next Saturday and go through UFC 257 on January 23.  It will be the first time that fans are officially in attendance at an event since March of 2020 at the onset of the coronavirus pandemic.

@DCTAbuDhabi is to host the third instalment of UFC Fight Island on @yasisland from 16 to 24 January, welcoming a limited number of spectators to the new Etihad Arena. pic.twitter.com/ALyCyaCRrx

Fans were previously expected to be in attendance for UFC 254: Khabib vs Gaethje last October although details weren’t finalized in time for the event.  Per the post, “a limited number of spectators” will be allowed in attendance and the events will now be held at Etihad Arena as opposed to the smaller Flash Forum where all of the Fight Island events have been hosted so far.  The fight cards will be the first events to be held at the Etihad Arena which had to postpone their grand opening due to the coronavirus pandemic.

UFC President Dana White had previously teased that fans would be likely to return for this latest stint in Abu Dhabi, going as far as to say it would be an International Fight Week of sorts with athlete signings and activities for the fans in the cordoned off section of Yas Bay on Yas Island.  Previously, only athletes, media, and other essential personnel for the events were granted access to the bubble.  After the rousing success of the first event, more individuals were granted access.

The upcoming stint in Abu Dhabi will feature three events in eight days.  The first will be a fight night headlined by former champion Max Holloway against Calvin Kattar on January 16 that will also be simulcast on network television on ABC in the United States.  The second will be a fight night headlined by a welterweight clash between Michael Chiesa and Neil Magny on January 20.  The run will culminate with the return of pay-per-view superstar Conor McGregor against former foe Dustin Poirier on January 23. 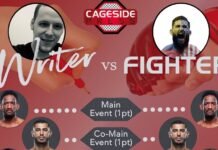 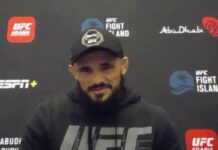