ONE Championship’s final card of 2020 aired on Christmas Day. Leaving a little violence under the tree, the six-fight Collision Course II was actually taped earlier in the month at the Singapore Indoor Stadium.

In the main event, Muay Thai action saw Jamal Yusupov go the distance with promotional veteran Samy Sana, with Yusupov earning a unanimous decision victory. On the MMA side of things, former flyweight champion Kairat Akhmetov returned to action for the first time in well over a year. The Kazakhstani fighter also took home a unanimous decision win, as he defeated South Korea’s Dae Hwan Kim.

With a showdown between Demetrious “Mighty Mouse” Johnson and Adriano Moraes penciled in for February, where Akhmetov stands in the division remains to be seen. But if he keeps on winning, he could see himself fast-tracked to a bout with the winner of that championship pairing.

Full results from ONE Championship: Collision Course II and a gallery of highlights can be found below. 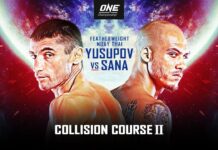