After multiple callouts of Michael Chiesa from top welterweight Neil Magny, it looks as though he has got his wish.

Per a report Tuesday, Neil Magny and Michael Chiesa is in the works for the January 20 Fight Island card. The news was first reported by Brett Okamoto at ESPN. Before the bout was agreed on, Magny (24-7) called out Chiesa (16-4) twice after back-to-back victories inside the cage.

A tough out for any welterweight, Magny is a tricky athlete with great movement. Consequently, the 33-year old is on one of the best streaks in his career. With decisive wins over Jingliang Li, Anthony Rocco Martin, and former welterweight champion Robbie Lawler, the “Haitian Sensation” has maintained a top position in the welterweight division. While most of his performances end in a decision, Magny has incredible control over how the pace of a fight plays out.

Featuring Khazmat Chimaev versus Leon Edwards as the headliner, the UFC’s January 20 card will no doubt be a big hit. Furthermore, it will serve as the second of a three-event stint at Fight Island starting January 16. Ultimately Fight Island will end with one of the biggest fights in recent memory as Conor McGregor returns against Dustin Poirier in a pivotal lightweight matchup.

With the addition of Neil Magny and Michael Chiesa, here are the rest of the bouts scheduled for the second fight island card: 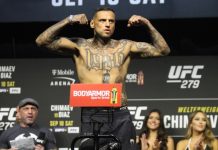