The rest of the six-fight card was comprised of MMA action. In perhaps the most significant fight of the night, former featherweight champ Marat Gafurov served up the first defeat of prospect Lowen Tynanes career. While no means a blowout, the split decision loss will represent a small step back for the highly touted Tynanes.

Full results and a gallery of highlights from ONE Championship: Collision Course are available below. 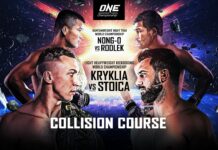 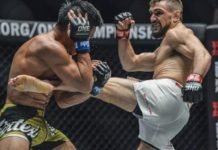