Mazdyuk (3-1) is the latest addition to the Bellator roster. But rather than being an immediate threat to win a title, or even an up-and-coming prospect, the Russian is best known for an open weight fight she took against a 529lb man, Grisha Polnoe, last month.

Mazdyuk, who generally competes at featherweight, won the exhibition bout via TKO in the opening round. The win does not reflect on her official record — but video of the fight went viral, a throwback to PRIDE-era freakshow fights in MMA.

Mazdyuk’s signing was first reported by Barstool Sports, who listed the Moscow-based fighter as a flyweight. The lowest she’s ever competed professionally is at 135lbs. She was reportedly in the range of 139lbs for her open-weight, cross-gender bout last month.

A good freakshow fight was once something of a tradition in mixed martial arts. The likes of Bob Sapp and Hong Man Choi built their careers around them. And don’t forget Emmanuel Yarborough vs. Daiju Takase. But as the sport has evolved and sought (and to some extent achieved) mainstream acceptance, they’ve been more or less relegated to the outskirts of the sport, or left in the past altogether.

Mazdyuk will likely want to leave her freakshow fight in the past as well, moving forward. But it has at least landed her a roster spot in one of the world’s largest MMA promotions. 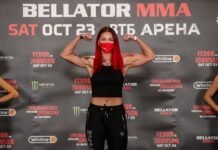