Las Vegas, NV — Charles Oliveira did something at UFC 256 that no one has done before: he made Tony Ferguson look average.

That might be a little bit of an exaggeration, as Ferguson still managed to show ample heart, gutting his way out of submission attempts on what seemed like sheer will power alone. But as a fighter, he looked just like any other against Oliveira, the man who holds the UFC’s all-time submission record.

“It’s what we predicted. He was a champion, he’s a very tough guy. We expected to go in there and have a great fight like that,” Oliveira (30-8, 1NC) told media outlets including Cageside Press following the fight.

“Do Bronx” believed that he had broken Ferguson’s arm during a submission attempt in the opening round. “But I wanted to win. We had a game plan set, and I wanted to win at any cost.” The arm, if it was broken, didn’t stop Ferguson from finishing the fight. Oliveira, however, was the clear winner.

Over the past year or two, something has definitely changed in the decade-long veteran of the octagon. Oliveira appears more confident, and he’s now put together an eight-fight win streak with seven finishes.

In way of explanation, the Chute Box fighter said that “after my daughter was born, my mindset just changed completely. I’m here to be the champ. I train at Chute Box, the best striking team in the world. My coaches were saying ‘you get beat up so much in the gym that it’s not big deal.'” With that newfound confidence, especially on the feet, Oliveira has looked like a different fighter. And when his coach told him that a Ferguson cross had landed during Saturday’s bout, Oliveira realized that “I didn’t even feel it.”

“Every training session [at Chute Box] is a fight,” he added. “It’s different than anywhere else.”

Now, Oliveira is ready to move on to the next level. Which would mean fighting for gold. And he’s not expecting lightweight champion Khabib Nurmagomedov to return, although the UFC itself has been hesitant to officially acknowledge the Dagestani fighter’s retirement following UFC 254.

“Khabib swore on his father’s grave that he wasn’t going to come back. When a man does that, I don’t think he’s going to come back,” observed Oliveira. Then there’s Justin Gaethje, who at times has been rumored for a match-up with Bellator champ Michael Chandler. “Gaethje can go fight whoever, but I want to fight the winner of Conor [McGregor] and [Dustin] Poirier. I have eight wins in a row. Seven of those, I finished the fight. I don’t let it go to the judges’ hands. I finish fights, and I deserve [it], I’m in the position to be fighting for the belt.”

McGregor vs. Poirier 2 headlines UFC 257 next month. The winner of that fight would also be in a very good position to challenge for gold.

Asked whether the win over Ferguson means more to him now, after a decade in the UFC, Oliveira stated that “I think everything happens at the right time. It’s whatever God wants to happen.” His fight with Ferguson is the perfect example. “This is a guy that everyone calls the Boogeyman. And we went in there, and we had an amazing fight. I’ve been telling everyone I’m going to be the champion, people don’t believe it, so I have to show them.”

If Khabib is deemed retired by the time McGregor vs. Poirier 2 rolls around, there’s always the possibility that their fight becomes a title affair. Or winds up having an interim belt slapped on it. In any case, when the idea of serving as a backup fighter was suggested to him, Oliveira replied “Dana [White, UFC President], just call my manager if you want me to fill in.” 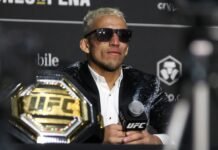