Bantamweight Magomed Magomedov made his promotional debut at Bellator 254, and the former ACB champion immediately made his presence felt.

It’s not often you see a debuting fighter (let alone two) in the co-main event of a major card, but that was the case with Magomedov vs. Matheus Mattos, a fellow ACB alumni. It was Magomedov (17-1), however, the only man with a victory over UFC champ Petr Yan, who picked up the unanimous decision win.

According to the Russian newcomer, he wasn’t even at full power in the fight.

“I felt great but I feel like I was probably about 60%,” he told media outlets including Cageside Press following the fight. “I basically just showed that I could wrestle well, but what I didn’t show is how I mix it up with the stand up, and some of my stand up. But that will come.”

Ring rust and injuries in training camp played a factor in that, Magomedov stated. Plus, in a new promotion, there were “a little bit of nerves, a little bit of everything.” As to where the win leaves him in Bellator’s increasingly interesting 135lb weight class, “I’ll be honest with you, I have no idea because I don’t know where I’m at,” he said.

Of course, the higher the promotion places him after the win, the better, Magomedov added. “My ultimate goal is to fight for the title. But I think I probably earned some credit. [Mattos] was a tough opponent, and I showed a dominant performance.”

“At the end of the day, wherever I am, I’m going to work to get to the title,” Magomedov continued. Although when that day comes remains to be seen. Juan Archuleta sits in place as champ, and fighters like Sergio Pettis and Brett Johns are also in play.

Plus, while it may come as something of a surprise given the competitive nature of MMA, Magomedov would actually like at least one more fight before a title shot comes his way. “I’m kind of glad the fight went to three rounds because I got some ring time in,” he stated. “I wouldn’t mind having one more fight just to kind of open up more and really get going — and then I’m definitely ready for a title.” 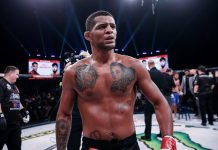 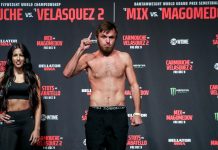 Bellator 289: Magomed Magomedov Says He Has All the Tools Necessary to Beat Patchy Mix 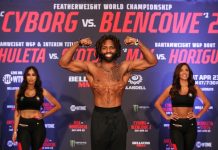