The final event of Bellator’s 2020 featured one of their biggest homegrown stars returning to defend her flyweight title. Ilima-Lei Macfarlane was set to take on Juliana Velasquez at Bellator 254, a collision of two undefeated powerhouses in the promotion’s flyweight division. It was a bout over a year in the making, and represented to many the biggest challenge of the Hawaiian’s skills to date.

Kicking the evening off, however, was a collection of prospects looking to move up the Bellator ranks. Those included several undefeated fighters, with the likes of Cody Law, Romero Cotton, and Robson Gracie Jr. in action.

Originally, Davion Franklin was among that list of perfect prospects — but after Goiti Yamauchi’s fight with Nate Andrews was cancelled when Yamauchi missed weight, Franklin vs. Anthony Garrett was promoted to the main card.

Full results from the preliminary portion of Bellator 254 can be found below. The action gets underway at 8PM ET, live from the Mohegan Sun Arena in Uncasville, CT. A live stream of all the early fights is available above. 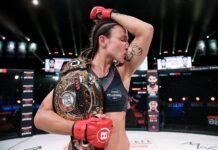 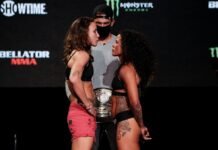 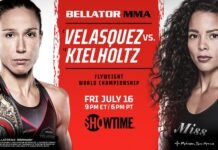