Romero Cotton locks horns with Justin Sumter at Bellator 254 on December 10. The middleweight bout emanates from Mohegan Sun Arena in Uncasville, Connecticut. It’s a fight months in the making, as the pair were originally scheduled to face off back in March.

Below are excerpts from my recent conversation with the 4-0, 185’er Cotton.

Romero Cotton, on the Build Up

Cotton vs. Sumter was originally planned for Bellator’s March 13 card, Bellator 241. A doomed event, in the end, as it wound up being cancelled due to the coronavirus pandemic. Right at the eleventh hour. Since then, it’s been quite the wait for the middleweight pair to finally throw down.

“It’s crazy. This dude’s been involved in my life for almost a year now. So it’s kind of like it’s like a title bout or some shit like that. It’s been like eight months of build up. But here we are, it’s a regular bout. I’m looking forward to getting in there and finally getting a hold of him.”

Being fully compensated for that canceled mid-March Bellator card

Luckily, all fighters on the ill-dated Bellator 241 card were compensated in the end.

“It was a good feeling because when everything started falling apart, I was about two hours away from checking in. Going in and checking in. Ready to go get my hands wrapped and all that…We owe a lot of people.”

“We owe some trainers, our coaches, our training partners. Everybody that came in and put in all that work. To think that we’re not going to be able to fight and not be able to get paid and able to pay them. It was devastating. To find out ‘bam, here you go. Here’s your full cheque’. First-class organization. It was a good thing.”

Thoughts on Sumter as an opponent

Cotton knows his opponent is a veteran.

“He’s an MMA fighter. He’s been doing it for a long time. He has fights going back 12 or ten years ago, he’s been in this game for a while.”

Still, Cotton has confidence in his well-roundedness from work at AKA. Plus a deep wrestling pedigree in high school and college. And a renewed sense of beginner enthusiasm within MMA.

Sumter’s educational background is rooted in sports management as well as psychology. So he can no doubt understand how much of a cerebral aspect comes into play for fighting. And when you go back to his wrestling roots, he has the experience as well.

“As far as that goes, I’ve been wrestling now at a high level since I was a little kid.”

Bellator 254 goes down this Thursday, December 10 at the Mohegan Sun Arena in Uncasville, CT. The main card airs live on CBS Sports Network following prelims that can be found on Cageside Press. 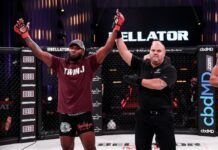 Bellator 283: Romero Cotton Says Fighting Him Is Like “Super Bowl” for Dalton Rosta