The Bellator 254 main event is official, with both Ilima-Lei Macfarlane and Juliana Velasquez making weight successfully on Wednesday.

That was not the case for one other fight on the card, however. Longtime Bellator mainstay Goiti Yamauchi blew well past the lightweight limit for his fight with promotional newcomer Nate Andrews. Clocking in at 162.8lbs, Yamauchi’s fight wound up pulled from the card — and he is expected to be required to compete as a welterweight moving forward.

The heavyweight bout between Davion Franklin and Anthony Garrett now moves to the main card as a result. Andrews, meanwhile, will be compensated as he weighed in successfully.

The rest of the Bellator 254 weigh-ins went according to plan.

Full results can be found below. The ceremonial weigh-in gets underway at 2PM ET. Video of that can be viewed above. 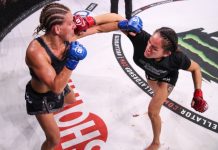