For UFC Vegas 16 we will take a look at some fighters with only a few (5 or less) fights in the UFC, rather than those fighters that are long-time UFC veterans with a bunch of finishes with the promotion.

Justin Jaynes has bombs in his hands. The 31-year-old has eight TKO/KOs in his professional career, all of them by punches. Justin was on a four fight win streak, all first-round finishes, when he got his opportunity from the UFC, though it was last minute.

Jaynes made his UFC debut on short notice and did not disappoint with his 41 second TKO over Frank Camacho where he looked absolutely vicious. The showing was enough to net Jaynes a performance of the night bonus.  Jaynes seemed to land every punch he threw at his opponent and came out of the fight unscathed. Less than a month later, Jaynes lost in his most recent fight to Gavin Tucker. Jaynes will be looking to get right back in the win column at UFC Vegas 16, with another pretty quick turnaround.

A look at Justin Jaynes tkopic.twitter.com/lbphffebHJ 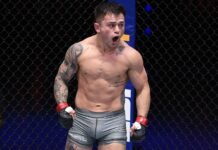 TJ Laramie vs. Damon Jackson Set for May 1 UFC Card 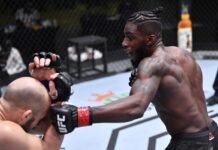