While the UFC is in action Saturday, Friday features a host of prospects from MMA-land, as both LFA and ONE Championship are in action. We look at those cards and more in this edition of the Weekly MMA Prospect Report.

Tonon is well-known in the world of BJJ as he holds accomplishments such as IBJJF Pan-American No-Gi Champion, IBJJF World No-Gi Champion, EBI lightweight champion, and much more. Tonon has looked stellar in his MMA career and has even looked great on his feet. Tonon uses nice footwork, landing one-twos and throwing with a lot of output while moving in-and-out. He’s shown good wrestling, getting double-legs and trip takedowns. The mat is his world, as he finds dominant positions easily and while his ground-and-pound is very good, he is obviously a big submission threat. He fights Koyomi Matsushima (12-4).

Aliakbari is a very accomplished Greco-Roman Olympic wrestler, and he’s transitioned well to MMA. He can use his strength to suplex his opponents repeatedly, and he has good pressure on top with solid ground-and-pound. Sometimes he does so much with his wrestling that he runs out of energy by the end of the fight, but if he learns to be more conservative or ups his cardio, he will be a huge threat. He fights Islam Abasov (6-0).

Phogat still new to MMA, but is a former wrestler who won a gold medal in the 2016 Commonwealth Wrestling Championship. So far in her MMA career, Ritu hasn’t had a problem getting the fight down. Once on top, she has proven to have heavy top control and really active ground and pounds. She still has a lot to show but has looked dominant. She fights Jomary Torres (4-4).

A former Commonwealth Games wrestler, the “The Little Giant” is a ball of energy standing at only 5’1″. On the feet, he has some power and is very explosive. Wanting to always close the distance he’s creative in the ways he does it throwing some “Showtime” type stuff. It’s easy for Masunyane to get low and when he does he will take you for a ride. Extremely strong, he shows that as soon as he gets his hands together. On the mat, he’s fluid in his movement and dominant with control. Not only one of the most intriguing prospects today but one of the most exciting. He fights Rene Catalan (6-3).

Gadzhi Rabadanov is on a six-fight win streak with key wins against Oton Jasse and Steven Siler. He’s an excellent wrestler and durable fighter who can go three rounds no problem. On the feet, he has some power and good leg kicks but looks most at home once on the mat. He has good ground and pound and is a submission threat as well. He fights Mehdi Dakaev (11-2).

Russian Sharapudin Magomedov is only 3-0 as a pro but has some good experience as he had a 15-1 amateur record. Magomedov has been very dominant thus far in his pro career especially with his ground game. He does have some heavy hands but is a much more dangerous wrestler/grappler. Magomedov is dominant once on top with excellent ground and pound and heavy position control. He fights Vyacheslav Svischev (4-0).

Romero has won multiple titles as an amateur, is 17-1 as a pro and amateur combined, and in his last fight won on the Contender Series. Despite a very impressive performance, he wasn’t awarded a contract. He’s also a Taekwondo black belt and a world IBJJF bronze medalist. Romero is extremely well-rounded. He has excellent wrestling, a good ground game, very technical on the feet, and has a great gas tank. He fights Zach Juusola (11-6).

Miller has a background as a wrestler being a three-time All-American at Notre Dame. Of course, Miller has good wrestling but he does have some bright spots on the feet. He throws a good one-two and his right hand is dangerous. Miller has the style to go far with his patient but technical approach on the feet and some solid wrestling to fall back on. He fights Regivaldo Carvalho (5-2).

Mark Martin doesn’t have much MMA experience but is a highly touted wrestler. Some of his accolades including being a Fila junior national champ, a two-time Ohio high school state champ, and a three-time D1 national qualifier from Ohio State University. There isn’t much footage out there on Martin but he’s obviously a strong wrestler. He has a good submission attack and has gone three rounds already so that looks good. He fights Matthew Colquhoun (8-4).

Borshchev stood out to me in his last fight being his debut for LFA. His striking and kickboxing are pretty high-level. His takedown defense does need to be tightened up. Borshchev is only 2-0 so being rough around the edges is expected however. He trains out of Team Alpha Male which is an excellent camp to help him with his wrestling going forward. He fights William Starks (3-1).

Only 3-1 as a pro but he had many amateur fights going 15-1. Starks was very successful in his amateur career being the IMMAF 2015 and 2016 world champion. He is a very strong athletic fighter and has very good wrestling showing nice timing and athleticism. On top, Starks is solid; he has won by TKO and submission but is more of a grinder. On the feet, it’s still a work in progress but he’s explosive, and has pretty good kicks. Still, a lot more needs to be seen from him given he’s only had four fights. He fights Viecheslav Borshchev (2-0).

Javid is an excellent prospect to keep an eye on but the competition he has beat has been lackluster. Javid is well-rounded as he has finished from both on the feet and off the mat. His footwork is quite advanced; the way he cuts angles and moves side to side is perfectly done and if I’m not mistaken he has a background in taekwondo. Javid isn’t just a flashy striker he is also an excellent wrestler that has a strong submission game and does a great job at creating space and landing big ground and pound. He fights Aleksandr Bezkorovainiy (11-2) who is a good test.

Ribovics does a good job moving laterally coming in with different patterns. Ribovics has a variety of striking techniques sometimes leading combinations with elbows and uppercuts. The way he throws from different angles is nice to see. Also, his right hand is money when he lands it flush. As good as his striking is, he might be an even better grappler. His takedowns come from the clinch using trips and trapping his knee behind the leg, dumping his opponent down to the mat. Ribovics will then go for broke trying to get the finish or just a better position. He fights Javier Basurto (17-6).

Gavidia is quite the showman and he has every right to be, after stringing together eleven wins in a row after losing his first two fights. Gavidia has a background in jiu-jitsu and was a boxing champion in China in 2008 and 2009. Rudy still has a lot to prove as his competition has been weak but he’s looked good despite that. Gavidia is well-rounded as he has a good jab with leg kicks on the feet. He moves well on top but is very heavy at the same time, and while he has good ground-and-pound, he does hold five submissions. Rudy has a fun fighting style and his personality alone should draw in a wide audience. He fights Bruno Conti (10-5).

Santos is an interesting prospect. A towering 6’4″ he previously fought at middleweight. The Brazilian is limited on the feet, and while he has heavy kicks his brawling style throws technique out the window. Santos does have raw strength and that has earned him these wins. If he gets taken down, he will just stand up and take top position, Derrick Lewis style. If he does get on top, then he’s most likely staying there due to his size and his best weapon, which is his ground-and-pound. He fights Tyago Moreira (14-8). 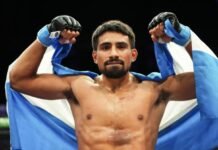 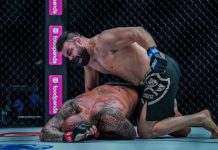